I think everyone has memories of certain holiday gatherings that they’ll never forget.  Usually it’s because something really special or very unfortunate happened.  But how many of us can say they’ll never forget a certain Thanksgiving dinner because the host wound up fighting a duel with the intended dinner?

Well that’s what happened this year and I don’t think I’ll even need to watch the video I took of it, to help me remember.  However, I will be saving it to show any children or grandchildren I have down the road, so they can see what craziness can ensue when you let Uncle Nathan try to prepare a holiday dinner.

It all started about a week ago, right after Mom gave birth to my new baby brother Geoffrey.  I was on hand for the event, while Dad and Uncle Nathan stayed in the Waiting Room.  Mom had given strict instructions that neither of them were allowed to be on hand to watch.  In fact part of my job was to make sure they didn’t come in.

I asked Doctor Jack about it later and all he did was smirk and mumble something about a Dr. Quackenbush and associate, who had been on hand to help keep the patient relaxed.  The name sounded familiar to me so I Googled it afterwards on my laptop and found it was one of Groucho Marx’s personas from a movie called “A Day At the Races”.  Apparently, he’d played a veterinarian who also treated a rich woman as one of his patients.  Having seen Uncle Nathan’s Groucho impression I could only imagine what kind of nonsense he and Dad must’ve gotten up to inside the delivery room that day until Mom ordered the two of them out. 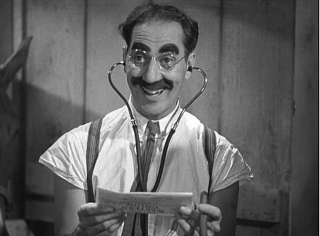 Anyway, right after Geoffrey arrived, Uncle Nathan offered to host Thanksgiving over at The Crypt.  “Between late night feedings and changing diapers I don’t think any of you are going to be up to shopping and prepping a big meal,” he pointed out.

Needless to say, none of us disagreed with him.  He even invited Dr. Jack and his family to join the festivities, which my favorite physician readily agreed to.  We didn’t see or hear from Uncle Nathan again for the rest of the week, which made my parents wonder if dinner was still on.  Then last night he phoned to let us know he’d been called away to help his old friend, Professor Otto Hofstadter, with a little ‘problem’ which they’d successfully resolved, and that we were still expected the next day at 5:00 PM. 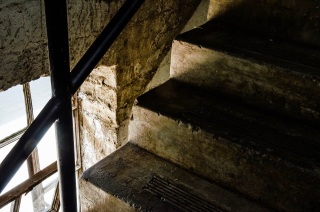 Needless to say we left the house today and headed downtown.  Once we reached the building that housed The Crypt, we headed down the side alley where the stairs leading down to The Crypt awaited.  Dr. Jack and his family were just heading down the steps when we showed up and after the usual Thanksgiving greetings were exchanged, we all carefully made our way down the steps.  The door at the bottom was unlocked so we let ourselves in only to have our breaths taken away.

As usual, Uncle Nathan had really gone all out with decorating the place.  There was a huge table that could seat a couple of dozen people just on one side, in the center of the main room.  It was all decked out with candles, plates,fancy napkins, the works.  There was also a very expensive looking harp nearby, which meant we would probably be treated to some fine music afterwards.  As we all gazed around in wonder, I couldn’t believe he’d gone to so much trouble just for us, but I was glad at the same time.  “This was going to be one of the most memorable Thanksgiving dinners ever,” I breathed aloud, while everyone nodded in agreement. 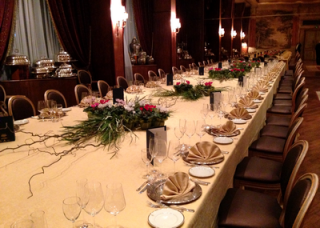 Uncle Nathan appeared a moment later, wearing a white apron and a big chef’s hat.  After greeting each of us, he got everyone settled in and disappeared back to the kitchen area.  We were all excited and eager to see what he had prepared for us.  A moment later, he came back out carrying a huge glimmering silver platter.  Naturally it had a very shiny lid which was rather tall, leaving us all wondering how big a turkey he had gotten for the occasion.  However, knowing his sense of humor, I I half expected it to be a very small bird no bigger than a pigeon,  But much to my surprise and delight, when the cover was removed, there was indeed a very large bird on the platter.

After running back into the kitchen and returning with more dishes, he removed his hat and apron, and proceeded to brandish a very large fork, which he deftly sank into the turkey.  Only to have the bird jump up, remove the fork from itself and then waved an angry fist at him.